"The Gateway to the Queensland West"

Commanding the Top of the Range and Spreading West

From their location on the New England Highway the Darling Downs centres of Toowoomba, Warwick and Stanthorpe have long a colourful histories which still fascinate the visitor.

Toowoomba is only ninety minutes west from Brisbane, proudly towering over the coastal lowlands scattered out below. It is also Queensland's largest inland regional city and is the commercial and economic hub of the Darling Downs with a population of over 90,000. Toowoomba's origin dates back to 1827, it is a very picturesque mountain and historic city set on the rim of the Great Dividing Range approximately 130 from Brisbane.

The week-long Carnival of Flowers is held in Toowoomba every September (spring) the cities parks and gardens come to life with a vibrant colourful celebrating Toowoomba's status as "The Garden City" with a street parade, and much more.

Toowoomba is sometimes referred to as "THE SWAMP" because they say the pronunciation of Toowoomba is the Aboriginal word for 'The Swamp'. There are many things to see and do in Toowoomba all year round, the townships sits at the edge of the Great Dividing Range at an altitude of around seven hundred meters above sea-level, the views of Table Top Mountain and the Lockyer Valley region are breathtaking.

Toowoomba is one of Queensland's prettiest cities and the fresh crisp mountain air, wonderful views and historic township makes this city a pleasure to visit and a great central point for exploring the surrounding Darling Downs and Great Dividing Range. Looking out in any direction there are panoramic views with magnificence deciduous trees, manicured parks and the sprawling plateau features of the Darling Downs farming pastures to the west, the Granite Belt to the south and the picturesque hills of Crows Nest and Hampton to the north.

North-west of Toowoomba, with access from either the New England or Warrego Highways, the Bunya Mountains can be seen rising dramatically against the country sky. This unique offshoot of the Great Dividing Range has dense rainforest, waterfalls, walking tracks and the largest remaining stand of bunya pines anywhere. A great place to stay is at one of the comfortable Bed and Breakfast hideaways, hostels or apartments, it is also an exciting camping destination almost all year around as the temperature is generally mild, though some winter nights can get a little chilly outside.

Toowoomba has an array of various art and cultural events held against a backdrop of displays of the local fruitages of the district. The Preston Peak Winery Jazz Festival is held there in The Vineyard on the south-eastern fringe of the city and to the north the Hampton High Country Food and Arts Festival is set among rolling hills. This event climaxes with the Signature Dish Competition, pitching chef against chef in the preparation of beautiful local produce.

The spirit of South-east Queensland Country's pioneering rural heritage lives on at Jondaryan Woolshed. Just thirty-five minutes west along the Warrego Highway this memorial museum is a tribute to the pastoral (farming) history of the Darling Downs. With an array of vintage machinery, renovated sheds and lively exhibitions it is a glimpse into the development of the districts agricultural achievements.

Whether taking a day trip to this beautiful city or coming for a fortnight the drive 'up the range' is worth the time and petrol. There is great accommodation in and around the city and wonderful restaurants including the famous seafood smorgasbord at the historic Weis Restaurant, the name synonymous with the ice-cream that has been produced in Toowoomba since 1930. The historic buildings like the Empire Theatre, the Old Post Office and the oldest pub in Queensland are a reminder of how old Toowoomba really is and along with the picturesque Queens Park are interesting highlights of the city. These are just some of the many special delights to be enjoyed in Toowoomba and the Darling Downs. 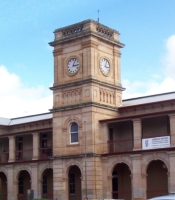