"The Changing Landscape of the Farmlands"

Between the Great Dividing Range and the Outback

The Newell Highway crosses the Queensland border from Goondiwindi and traverses New South Wales from north to south and takes in the wonderful rural towns of Narrabri, Coonabarabran, Dubbo, Forbes, Parkes and Narrandera before crossing the Murray River into Victoria at picturesque Tocumwal.

Along the way there are the Warrumbungle Mountains, the Dubbo Western Plain Zoo, the famous satelite 'Dish' at Parkes and a host of other natural and man-made attractions.

In good seasons the mid-west of New South Wales flourishes with grazing grasses for cattle and sheep as well as paddocks of wheat and other grains as far as the eye can see. Dubbo is just one, but the largest of, the major towns and cities that service this vast farming district. Dubbo's population is thirty thousand and it is the regional capital of the western outback of New South Wales.

The journey by road or rail to Dubbo is a scenic one, traveling along country roads or railway passes through the Blue Mountain range, Bathurst and Orange which are all great places to visit and enjoy. Dubbo is about four hundred kilometers from Sydney and one hundred kilometers north-west of Orange and sprawls across the Macquarie River.

Nearby, twenty kilometres north of Parkes, is the Dish, the radio telescope that sits in the middle of a sheep paddock and made famous in the film of the same name. Other attractions are the Old Dubbo Gaol and the Dubbo Museum and History Centre situated in what was previously the Bank of NSW.

Built in 1873, the original two-storey sandstone bank building with its cedar staircase, marble fireplaces and decorative ceilings now contains many Aboriginal and commercial artifacts. There is also a replication of an old village square.

The Dubbo Taronga Western Plains Zoo is a very unique open range zoo set in over three hundred hectares of bushland and which is home to more than one thousand animals. The five kilometres drive to the zoo is well worth the drive, or bus trip, as the animals are kept in all natural surroundings separated by creeks and moats and fences are rarely seen. You will find most of the Australian Animals there plus a number of imported species from five continents. The zoo was in fact started as a breeding project to enhance the Sydney Taronga Zoo and has gained a worldwide reputation for the conservation of endangered African species.

Dubbo is a central shopping facility for surrounding towns and stations and there are beautiful parks and gardens and the train ride from Sydney is a great one or two day excursion. With plenty of accommodation there is always somewhere to stay the night, or two, or three as there is a lot to see. As is the case is most regions of Australian country life sport plays a big role in the social community and there are great facilities and many major events held because of its central location.

Whether making the trip to Dubbo for one of the many cultural or sporting events held here or just passing through be sure to take a few days to enjoy this pleasant and relaxing part of the world that appears to be far from anywhere in the open. The facilities are exceptional and the locals hospitable country folk. Dubbo has its own airport and a passenger train and buses also service the city.

Once the Blue Mountains were conquered one of the first cities to spring up west of the 'divide' was Bathurst. With hills climbing all around the town it is a very picturesque town, as is its twin town Orange just down the road and through a few valleys to the west.

Both are central to the surrounding farmlands and the gateway west to Dubbo and the wide sweeping farmlands of the Central West. It is also home to Mount Panorama which roars to life every year for the Bathurst 100 V8 Super Car Endurance race, the biggest car race in Australia. A public road during most of the year, it is a great drive and the veiws from 'Skyline' spectacular before diving down through the esses towards Forest Elbow and the renowned Conrod Straight. Nevertheless, although it is sometimes used as a race track it is not recommended for the regular driver to test their skills on it, certainly Conrod Straight is an eighty kilometre zone just to keep anyone in check!

Just two and a half hours along the Hume Highway south of Sydney is situated one of the countries most historic larger towns. The gaol at Goulburn has many stories to tell and the sweeping hills surrounding the town have produced much of the countries needs. It is a very old town and although it is modernised many of the historic buildings remain in top condition. There are some old traditions too like the Paragon Cafe where you would think you were in a James Dean movie and the Post Office clock tower. 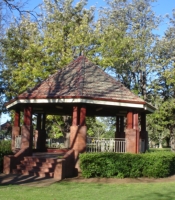 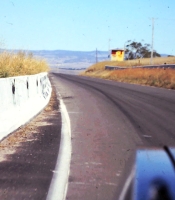 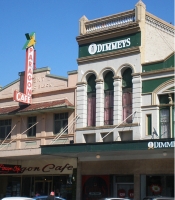