Most new Australian's or migrants came, or were brought to, the land downunder on work schemes or a personal search for something new. Up until the 1970's Australia had a 'white Australia' policy that determined only white migrants were allowed into the country however since then many of different nationalities have arrived to settle here. 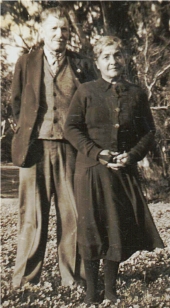 In the 1800's many arrived in the search for gold on the new minefields of Ballarat and Bendigo outside MELBOURNE in Victoria and at Kalgoorlie in Western Austrlia. increased opportunities also arose for many new workers over the last 150 years with special schemes like the Snowy River Hydro-electric project attracting high quality skilled workers from all over Europe in particular. Many have also come to work in agriculture and more recently in the medical field.

Many became land-owners in the cities and in farming areas and were well respected for their hard working ethic. Some started on fruit 'blocks' (orchards) by buying one orchard among two or three families and as the wealth grew they purchased more so that each family had their own. This community sharing helped their families prosper.

The very first migrants could be said to be the first English settlers, though there appears to be evidence that earlier than 1770 Chinese and Dutch peoples arrived and stayed, though for a short time only.

The first fleet arrived amidst much interest from the locals who on the whole welcomed their visitors, a welcome that turned sour on them when some whites treated the ABORIGINAL population with disdain and brutality.

However on the whole the white settlement of Terra Australis was peaceful compared to the many other 'invasions' of then recent history; the American Indian wars, the Spanish invasion of South America and the European (British, French and Prussian) presence in Asia and Africa all caused horrific fighting.

That is not to say that there was not some brutality in Australia, not restricted either to the Aboriginal population, some subsequent migrants have also found it difficult to be accepted in the new land. In 2011 a movie called Oranges and Sunshine tells the story of young English children being taken to major Australia cities like SYDNEY, MELBOURNE, and BRISBANE with promises of a 'bright new world of opportunity, of oranges and sunshine', nevertheless they found life without family and old friends difficult in what was still a relatively 'new land'.

Nevertheless with the events of the past century now behind and some reconciliation between most peoples, Australia is now generally a peaceful place to be, and the influx of the many diversified migrant populations has created a truly unique society of AUSSIES without any major racial issues.

Walk through any suburban township and you will find a Pizza Shop, a Chinese Restaurant and Italian Coffee Shop. Likely you will also find a Thai Restaurant among many other shops and buildings reflecting the diversity.

Read through the list of any SPORTS team and you will find a name with migrant heritage; like Minichello or Dipierdimenico. Among those playing that unique Aussie brand of Footy are David Wojinski and James Podsiardly from Polish heritage, Majak Daw from Sudan, Nic Nautanui and David Rodan from Fiji among many others. Dokic, Tomic and Phillipousis are among the list of Australian tennis players with European heritage.

The diversity is also reflected in the number of different sports played in the country, with up to five different major football codes alone represented (Aussie Rules, Rugby Union and League, Gridiron and Soccer).

In all the major CITIES and towns there are clubs and community groups where migrants can found support among fellow new Australian's and catch up on the news from the'old country' - wherever that may be.