The largest bird of prey in Australia 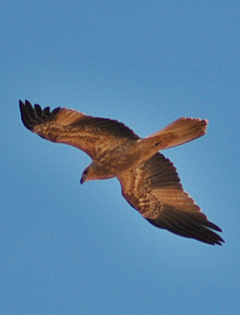 They say there are presently 48 different kinds of eagles in the world today.

Australia has only three of them, the Golden eagle and the Gurney eagle and the magnificent Wedge-Tailed eagle. The Wedge-tailed Eagle is one of the largest eagles in the World. weighing in an average of 4 kgs, and they have a great whooping spreading wing span averaging 2.5 metres and it is Australias largest bird of prey. The bird can be found all over Australia.

This is one very impressive bird. It will spend much of the day light hours perched in high trees, on rock out crops or cliffs, looking over its territory searching for it next meal.

Every now and then just gently flapping its wing to lift off and soar to sometime great heights, circling and watching. This bird is capable of reaching enormous heights 2,000 meters using its enormous wings picking up the thermals in flight they a magnificent to watch.

Up to 90 per cent of a wedge-tailed eagle's diet is made up of animals that dwell on the ground they feed on animals, including mammals and reptiles, rabbits, wallabie's small kangaroos, large birds, possums, foxes and feral cats to mention a little. They also feed on dead animals, such as road kills. They have a sharp keen eye with fantastic vision so they are able to spot food form great distances.

The Wedge tail eagle is able to get into a high speed dive aiming at their prey, on most occasions killing it instantly. Wedge-tailed eagles will also eat sheep, but usually only go after the weaker or dying animals.

In times gone by, the wedge-tailed eagle was targeted as a bird that was considered to be a pest as it had developed a reputation as a killer of young lambs and sheep. Farmers and hunters killed thousands of them. They are now protected and it is illegal to kill, trap or poison them.

The birds nest is usually built in the most elevated position that is available in there territory and it can be somewhat large often three meters DEEP and two meters WIDE. The nest is prepared by both male and female and consists of a large style platform of sticks and other local materials the male lines it daily with fresh leaves.

The birds breed in April until September and the females produce 2 or 3 eggs. The adult birds male and female eagles pair off for life. During the breeding season they preen each other, and they will chase away other wedge-tailed eagles who might entre their territory.

The male bird will occasionally incubate the eggs from time to time relieving the female.After the chicks have hatched, the male bird will do all the hunting bring food back to the nest for the female to prepare and fed to the young.

The Wedge-tailed Eagle is the fauna emblem of Australia's Northern Territory.