"The pelican - its bill can hold more than its belly can!" 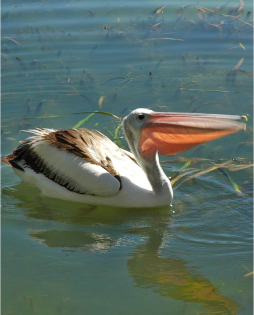 What a wondrous majestic bird is the pelican! It is said that the Pelican can take in his beak enough food for a week! Now that's a statement! People over the centuries have admired the bird and have wondered how do they do it.

In fact the pelicans history stems as fare back as 40 Million years according to fossils that have been found so we guess they have been doing something s right! The birds may live between ten and up to 25 years or more.

It is true that Pelicans are famous for their large beaks, which they scoop up and fill with gulps of water, then they are able to strain out the fluids, retain the food, fish or squid and eat or swallow it. Interestingly the Australian Pelican has the longest beak of any bird in the world. The Australian Pelican's bill is 40 to 50 cm long and it is smaller in the females to the males.

Pelicans are among the largest and heaviest birds in the world, and as such are very impressive in flight, however they are able to sit on the water with ease because of there very light frames; there bones are hollow and full of air plus they have air sack in there bodies which all assists them float, take off and in flight.

When in flight the Pelican are not able to sustained flapping there wings, However they are able to remain airborne for hours, covering great distances sometimes hundreds of kilometres. You would say they are excellent soarers and use warm thermals airs to rise higher and higher all with minimum effort.

There are a known 7 species of pelican and they are all sociable, it very rear indeed if you ever see a baby pelican because they nest on smallish isolated coastal islands where they are safe from predators. The Female birds unusually only produce two or three eggs and they incubate for 30 to 40 days. The chicks leave their nests to form creches of dozens and dozens of birds. They remain with the group around two months and in this time they have learnt to fly and are looking much like mature adults.

The Pelican courtship is very interesting, the female seeks out potential mates and leads around the colony, on these walks they sort of threaten each other by swinging their open beaks trying to attract the female's attention. The male's birds often pick up small objects, which they flick into the air and catch again. The males do tire and finally, there is only one male is left so the female leads him to a potential nest site. The simple nest is established by the female scratching the ground with her bill and feet, she lines the nest with feathers and other bit of local vegetation.

The Australian Pelican is found widespread on freshwater, wetlands and waterways including lakes, swamps, rivers, coastal islands and shores throughout Australia on just about all coast lines, they are very mobile and continue to search for adequate food supplies. The bill and pouch of pelicans play an important role in feeding. It has a small but very usable hock right at the end and is used for gripping slippery food items.