"One of Australia's most spectacular flightless birds" 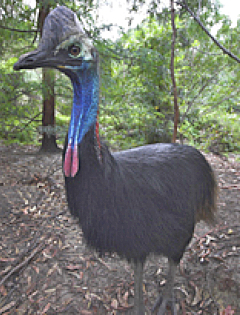 There are only three species of cassowaries in the world.

One is found in Australia - The Southern Cassowary

The cassowary, like the emu and ostrich, all are large flightless birds. The cassowary has unusual coarse hair-like plumage and no tail feathers. Its wings have a small number of long, quills which curve over the body. The bird is glossy black in colour with a chocolate hard axe shaped like helmet on the top of its head; the neck is a striking blue colour and from the bend in the neck there are longish red wattles.

The cassowary has amber eyes and walks tall on two strong legs each leg has three toes and the inside toe on each foot has a large claw they use for scratching the forest floor with and as a defensive tool. The bird stands up too 2 meters tall and the male and female are very much alike. Interestingly the female is larger than the male and often much more aggressive. The cassowaries are the heaviest bird in Australia females can weigh up to 75kg. Males range can be up to 55kg.

The cassowaries are solitary territorial birds and contact between adults generally only occurs during mating. They can be found throughout the rainforest in North-east Queensland. They eat fruit and hundreds of different types of plant life. They do play a very important part in maintaining the diversity of rainforest trees. The food or fruit they eat is swallowed whole and when digested it passes (some times hundreds at a time) the seeds in piles of dung helping ensure they germinate.

The female cassowary will mate with several males in a season and it should be noted that cassowaries do NOT mate for life or form long term bonds. The breeding season runs from June through to October. When eggs are laid the male takes on the job of incubating the eggs for about two months and he raises the chicks for a further 9 months. The chicks hatch and are coloured with dark brown stripes mixed with creamy white. The stripes will disappear after three to six months and the plumage changes to all brown. The other colours of the bird continue to develop until the bird is around three years old. Juveniles begin to take care for themselves from about eight to 18 months of age.

Sourcing out the cassowary can be some what difficult, one would think because of there size the spotting them would be easy. Cassowaries blend remarkably well into there rain for environments and the shadows of the trees around them. A good way to track them is via the dung piles they leave or there large three toe foot prints. You area able to hear there deep rumbling sound which the cassowary make when telling others they are around.

A word of warning! Cassowaries can be very aggressive. Be prepared for any encounter you may have they are a great bird to watch but keep your distance. If you come face to face with a cassowary, you best bet is to slowly back away putting something between you and the bird.

The cassowary is smaller than the emu but it is Australia's heaviest flightless bird.