"Hidden Gems all the way around the Apple Isle" 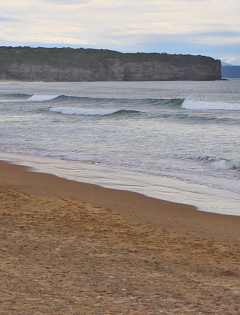 Clifton Beach is about 25 km southeast of Hobart on the South Arm Penninsula where further on at Oppossum Bay there is a great view of Hobart across the water. The Clifton Beach Surf Life Saving Club was established way back in 1963 and was a early favourite of surfers who trekked from the mainland. 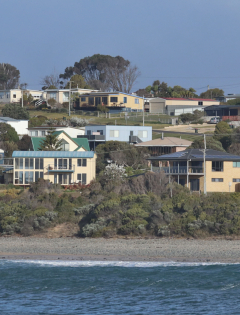 Lulworth on the north-east Coast of Tasmania is a picturesque little bay within an hours drive from Launceston.

The beach is relatively sheltered from westerly wind and waves by Black Rock Point, with wave height increasing eastward along the beach. Waves average over 1 m and maintain a low tide bar, with five to six rips forming during periods of higher waves, particularly along the central-eastern section of the beach. A left-hand point break known as Tom O'Shanter is located off the western rocks. The colourful houses of the small community of Lulworth is sheltered at the western end of the beach where further around the beach there are facilities to launch small fishing boats in the shelter of the point.

RETURN TO THE BEACHES PAGE