Only in Australia will you find a marsupal like this! 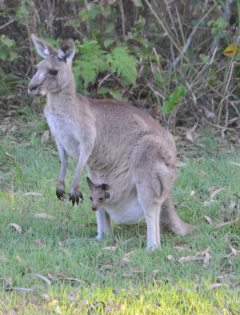 Nicknamed "boomer" or an "old man", most people around the world know a little about our famous long tailed, jumping marsupial.

Kangaroos are grazing animals that eat grasses, young tree shoots and leaves. You will find them all over Australia, including Tasmania and parts of New Guinea. They are the largest of the marsupial mammals and they belong to the Macropodidae family.

Kangaroos require very little water to survive and are capable of going for very long periods, sometimes months without drinking.

Most people know the Kangaroo moves around by hopping on its muscular hind legs. It's the most amazing animal when moving the kangaroo can reach speeds of up to 60 kilometres per hour and its tail is used to steer, keep the animal balanced and when they slow down for a rest they use it (there Tail) as a chair or for support. As a point of interest most kangaroos do not move one leg at a time but move both back legs together.

Very sensitive is our kangaroo and social too, they have fantastic eyesight and fabulous hearing. It's wonderful to watch there swivelling large ears as they turn in all directions to pick up sounds. They live in groups of two or three and up to 100s called "mobs".

Kangaroos usually have one "joey" per year. The baby "joey" stays in mums pouch for nine months and continues to feed until twelve and sometimes up to sixteen or seventeen months. Kangaroos can have three young "joeys" at the me time. One in the pouch and developing, another just out of the pouch and one embryo. For suckling, the doe has four teats in side the pouch and each one offers DIFFERENT milk "amazing"! and each milk is for different stages of the joeys development.

There are a number of Kangaroo species

Grey Kangaroo, western or eastern grey often called the "Forester" Possible the heaviest marsupial in the world. Bucks are lager than the female but rarely exceed 45kg. They live in small mobs but gather in larger numbers when feeding. They are normally active from late afternoon until dawn or early morning, snuggling together in the shade of trees and shrubs during the day. When on the run are capable of reaching speeds of up to 60 k Per our and at speed are able to cleared lengths in one hop of eight meters or twnenty five feet and heights of close to three meters or nine feet. There young are usually born once per year and weigh less than 35oz.

Red Kangaroos often called the "big red" is the largest marsupial in the world. And when we say big, we mean tall, strong and robust. The lady of the house, the female can be known as the "blue flyer" even tho she is a little red. That's because she has bluey grey reddish fur and of course the buck, male "big Red" so called because his colour can also be reddish in colour.

To keep it simple red kangaroos - normally move around in "mobs' (groups) any where between a few dozen into the hundreds. This group will consist of a dominant buck (male) and a number of adult females, and juveniles and joeys of both sexes.

Red flyers, females are sexually mature at around eighteen months, bucks, (males) at just on two years. Joeys or baby kangaroos remain in the pouch for some months usually up to six. They are usually weaned within a twelve month period. Because they are social animals the young remain close to mum for some months more.

Western and Eastern Grey Kangaroos, vary in colour, being anywhere from grey brown to chocolate brown. There muzzle is covered in finish hair. The western group is slender and greyish-brown in colour, and the southern group is stockier and brown in colour with bluish-grey underpants. The males can be known as stinkers due to their strong, hot curry smell.