The dog that has NO Bark! 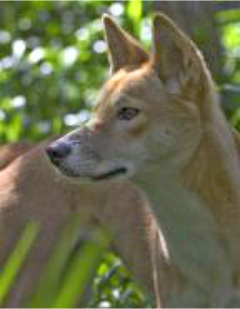 The dingo is a magnificent animal and Australia's wild dog. The dingo's origin is very uncertain, all tho researching scientists do believe that it could be related to Asian or Middle Eastern wolves and probably came to Australia sometime between 3,500 and 4,000 years ago.

The most interesting thing or distinguishing feature about the Dingo is they DO NOT BARK! Dingos are able to communicate over long distances with howls - like wolves.

Dingos live in most parts of mainland Australia but they are not an animal you will find roaming city streets. Dingos while they are not nocturnal they are more active during the night. Dingos will eat just about anything, but the most of their diet comes from kangaroos and wallabies, rabbits, possums and rats.

Being social animals, they live in family groups which helps defend their territory. They get around too, roaming over approximately 8000 hectares, but don't stray too much away from home during the day. They often spend a few days in one place and then move to another, gradually moving around their whole range.