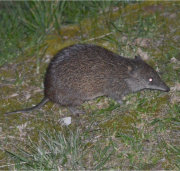 A small marsupial found in almost every area of Australia with its own variation of the species including the Bilby.

The bandicoot varies in length from about 6 to 22 inches (15 to 56cm) and weighs under 2 pounds (.9kg) depending on the variation of the species. It has fur that is coarse and may be orange, greyish or brown in colour, sometimes striped, with soft fur underneath. Its head is long and narrow with a long snout with sharp teeth.

The bandicoot is quadrupedal and its large hind legs are longer than the forelegs, and are used for hopping. They have three long central claws on the forefeet for digging to collect and obtain its food.

All species are nocturnal and hide during the day in their shallow, non-permanent nest often found in a hollow log or crevice, lined with sticks, leaves and grass.

They eat mainly of worms, insects and plants but they also eat lizards and even some small mammals, such as mice. They also dig little conical shaped pits looking for beetle larvae. They actually provide a useful service by eating insects, snails and mice however also feed on fruit and underground bulbs which can be annoying to the avant gardener.

Bandicoots are territorial and are solitary animals except when mating being aggressive towards other males that approach them. It fights by kicking at its prey furiously with its hind legs which often results in ripping off patches of skin and fur from its opponents and sometimes uses its fore-feet in the fight, using its teeth only as a last resort.

Like many other native mammals, many species have been declining in numbers and are in some places endangered.